Question of the month

Why is the sea salty?

Anyone who has tasted seawater will know that it’s incredibly salty – it actually has an average salt content of around 3.5%. Some of the salt in the sea comes from undersea volcanoes and hydrothermal vents, but most of it comes from the land.

Rain water dissolves minerals and releases salts from the rocks on land, which are then carried down to the sea by rivers. As the sun warms the sea, water evaporates but the salt is left behind, making the sea even saltier.

It’s estimated that 4 billion tons of salt enter the sea each year, but the ocean is not growing any saltier because a similar amount of salt is deposited on the ocean floor each year, so the salt level is fairly balanced.

The saltiness (called salinity) of the sea is not the same in all parts of the world. Near the equator, where temperatures are higher, more evaporation takes place and so the seawater has a higher concentration of salt. Near the poles, melting ice and heavy rain dilute the seawater, making it less salty.

Why is the sea blue?

The sea often appears blue because of the way light interacts with the water. White light is made up of many different visible colours ranging from red to violet – red has the longest wavelength, blue light the shortest. As water molecules are better at absorbing light with longer wavelengths, they absorb much of the red, orange, yellow and green light. The bluer colours, with shorter wavelengths, are less likely to be absorbed, giving the sea its blue hues.

Shallow water often appears clear as there are fewer water molecules to absorb the light, so other colours are able to reach the sea floor and reflect. The deeper you go, the more other colours are absorbed and the deeper blue the light becomes, until you reach the point where no visible light can reach, where it is completely dark.

The colour of the water also depends on other factors, such as what particles are floating in it. Coastal areas can sometimes look murky and brown as they contain sand from the seabed that has been churned up by waves.

Living things influence the colour, too. Phytoplankton are tiny organisms that act a bit like plants, using chlorophyll to absorb sunlight and grow. They absorb red and blue light, reflecting green light and giving the sea a greener look. Generally speaking, the more phytoplankton there are in the water, the greener it is.

Phytoplankton are really important as they produce more than 50% of the world's oxygen (meaning every second breath you take comes from the sea!) and are the foundation of marine food webs. 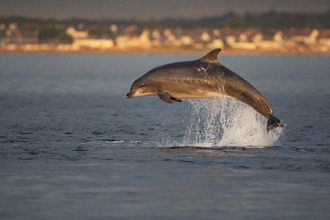 Bottlenose dolphins in British waters are the biggest of their kind – they need to be able to cope with our chilly waters! They are very… 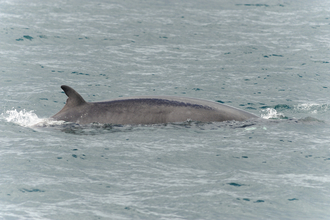 The UK's smallest whale, the minke whale, is notoriously inquisitive around boats and is even known to breach clear of the water.… 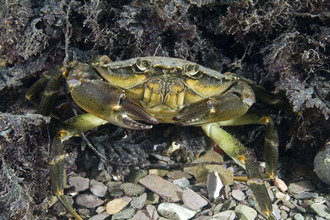 This crab is common around all of the UK. If you've ever been rockpooling or crabbing, it's probably the shore crab that you…